Repeal the HB6 bailout of the OVEC coal plants

Urgent: Please call your State Senator in support of SB117

Calling your legislators is one of the easiest and quickest ways to make an impact. To leave a message call Monday - Friday 8:30 a.m. - 5:00 p.m.

The repeal of HB6 is incomplete without a full repeal of the bailout for the Ohio Valley Electric Corporation (OVEC) coal plants--Kyger Creek in Ohio and Clifty Creek in Indiana.

The OVEC coal bailout was only added to HB6 after three of Ohio’s electric utilities--AEP, Duke, AES Ohio (formerly Dayton Power & Light--opposed FirstEnergy  getting a bailout for the Davis Besse and Perry nuclear plants. It’s important to note that FirstEnergy is a partial owner of the OVEC plants and is currently trying to detach itself from the corporation. It was only after the legislature provided AEP, Duke, and AES Ohio a bailout for OVEC that those companies changed their position to one of support for the exceedingly corrupt HB6. FirstEnergy also benefitted from the OVEC bailout in HB6. AEP, the largest shareholder of OVEC, was recently subpoenaed for its involvement in the HB 6 scandal.

Before the passage of HB6, the Public Utilities Commission of Ohio (PUCO) had already approved bailouts for AEP, Duke, FirstEnergy, and AES Ohio’s shares of the OVEC coal plants through the mid 2020s with an argument that the plants could be profitable if power prices were to increase significantly. Instead, the plants have lost money every single year and been a financial drain and environmental burden on Ohioans.

HB6 fundamentally altered the OVEC bailout by extending and expanding it.

HB6 also limited PUCO’s ability to protect customers from the OVEC bailout by allowing AEP, Duke, and AES Ohio to recover all “prudent” costs without defining what costs are “prudent.” 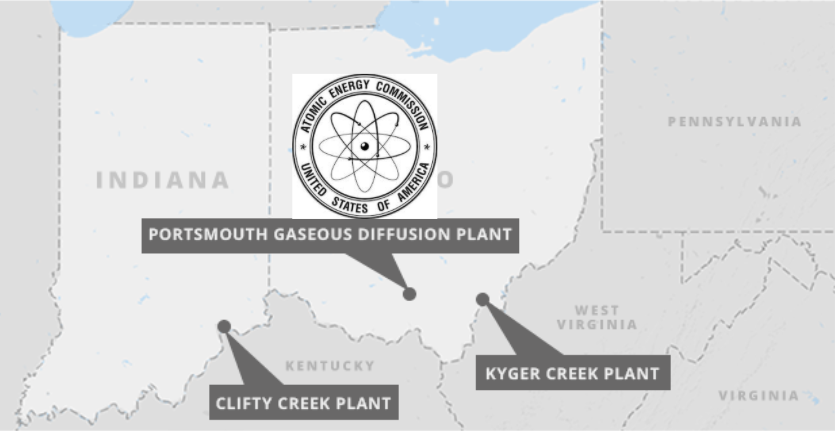 While OVEC was initially developed in response to national security concerns during the 1950s, OVEC’s contract with the Department of Energy ended in 2003. It was after this time that OVEC signed contracts with Ohio’s AEP, Duke, AES Ohio and a host of other power providers that extended the life of the power plants  through 2040. The OVEC units no longer provided power for uranium enrichment facilities, which had begun the decommissioning process.

After the end of the Department of Energy contract, all generation from the OVEC units began to be sold into the marketplace. OVEC contract holders renegotiated in 2011 extending a new contract out to 2040 without seeking approval from the PUCO. This decision effectively extended the Ohio utilities’ utilities to commitment to pay OVEC costs--whatever they end up being--through 2040. The owners made a bad deal, and are trying now to offload that bad contract onto its customers.

AEP, Duke, and AES Ohio have been losing money on their ownership share of these plants for years and that is projected to continue.

PUCO carried out an audit of the OVEC bailout in 2020. The independent auditor confirmed the OVEC bailout has not just been a bad investment to date but also that with increased capital investment, those costs will go up even more. Additionally, the auditor found the OVEC coal plants were being run at times where the costs would be even higher for customers; customers would save money if the plants just weren’t being run.

In late 2020, the OVEC plants filed with USEPA that each plant will comply with new environmental protections rather than retire. These new capital investments will mean new debt and costs for Ohioans.

The Ohio Consumers’ Counsel says that so far $107 million in coal subsidies have gone to OVEC coal plants since the beginning of 2020. Another $233,000 rolls in EVERY DAY. 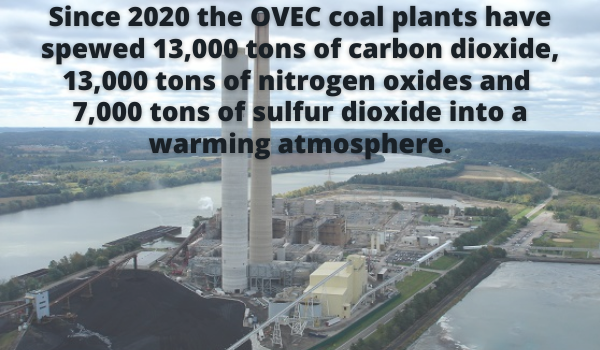 Read a summary of the bill

Ohioans should not be on the hook for AEP, Duke, and AES Ohio’s bad bet on the OVEC plants.

Ohioans shouldn’t be paying more each month to bail out two dirty, inefficient, expensive 1950s coal plants for the next decade. These plants should be retired, not bailed out. SB117 is the first step in that process.

SB117 must be passed so the PUCO will regain its authority to protect customers from the continued excessive OVEC bailout costs, and so the OVEC owners--AEP, Duke, AES Ohio--can take responsibility for the power plants that they own and that do not benefit Ohioans.

SB117 must be passed so FirstEnergy customers will no longer be on the hook for the OVEC plants--a cost they weren’t paying before HB6 was signed into law.

SB117 must be passed to limit utility influence and money--money collected from customers--in the legislature. The OVEC bailout in HB6 was a handout to AEP, Duke, and AES Ohio to get their support for the corrupt HB6. Ohioans should dictate what goes into legislation, not big companies like AEP, Duke, and AES Ohio.

Proponent testimony for SB 117 was held in May 2021. Testimony came from a large and vocal group of stakeholders. Business owners, environmental advocates, and members of the public all voiced their support for SB 117.

Opponent testimony for SB 117 was held June 15, 2021. It starkly contrasted the proponent hearing in that the only opposition came from representatives of the utility companies. 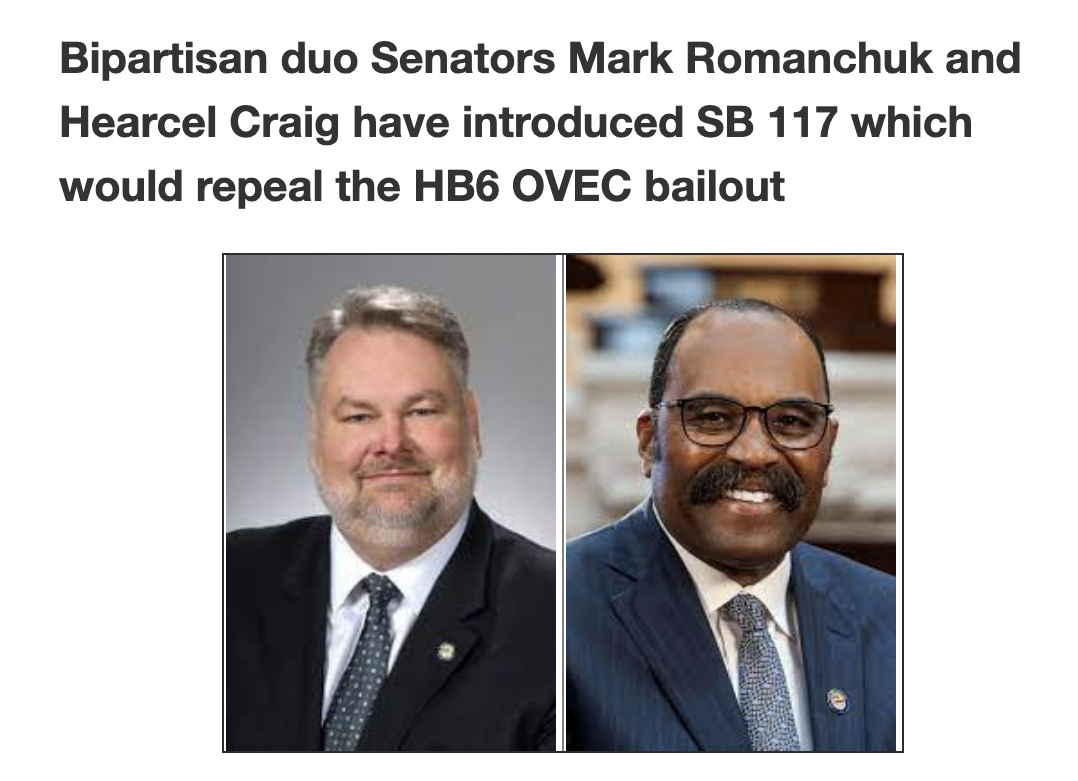