In July, 2020, Ohioans learned that HB6, dubbed "the worst energy bill of the 21st century," was passed as the result of an alleged $61 million racketeering scheme involving Ohio's former and now indicted Speaker of the House, Larry Householder, and his close allies. Almost immediately, multiple bills were introduced to ensure a clean, immediate repeal of HB6.

That same month, Bob Cupp replaced Householder as Speaker of the House. Cupp immediately formed the House Select Committee on Energy Policy and Oversight to reevaluate HB6. Despite Speaker Cupp's promise for a "fresh start" with HB6, the committee did little to forward meaningful repeal legislation. The committee moved slowly and shut out public input. Ohio Citizen Action and its coalition partners eventually had to take matters into their own hands and host their own public hearings on the HB6 repeal. Watch the recordings of public testimony here

New to House Bill 6? This article provides a deep dive inside HB 6 and the biggest government scandal in Ohio state history.

By April 2021, Ohio lawmakers repealed only parts of House Bill 6, including nuclear bailout.

Despite constant pressure from Ohioans for a full and clean repeal, state legislators have chosen to repeal only select parts of HB6. Passed through the General Assembly with little opposition and signed by Gov. DeWine on March 31 2021, House Bill 128 is the first legislation to repeal any part of HB6. Mainly, HB128 repeals the over $1 billion ratepayer-funded bailout of two of FirstEnergy’s failing nuclear plants. It was easy for FirstEnergy to give up their beloved nuclear subsidies, since a rule change from the Federal Energy Regulatory Committee (FERC) penalizes utility companies that do receive state subsidies.

Taxpayer dollars are still flowing to subsidize two dirty, Eisenhower-era coal plants partially owned by AEP and Duke Energy. So while lawmakers quietly repealed the nuclear bailout, the coal subsidies continue to roll in directly from consumers’ pockets. The Ohio Consumers’ Counsel says that as of April 2021, $254 million in coal subsidies have gone to OVEC coal plants as a part of HB6. Another $287,000 rolls in every day. Notably, an April 2021 analysis shows that none of these three utility companies pay any taxes.

Tell your legislators to FINISH THE JOB and fully repeal House Bill 6.

Passage of HB6 was bought and paid for to the tune of $61 million in payola and bribes --  and it still only passed by one vote.

It is one of the dirtiest campaigns we've ever seen, pushing an expensive, dirty energy bailout onto Ohio consumers. We're not surprised this particular bit of corporate welfare slid through by greasing palms.

Ohio taxpayers should not be saddled with this corrupt policy and the years of higher electric bills and pollution that come with it. Bribery and greed must not be rewarded. HB6 was a bad idea then, and it's a bad idea now.

Ohio Citizen Action calls on the Ohio General Assembly to immediately and fully repeal this corrupt law, and for Governor DeWine to support its rollback.

Our calls for a deeper investigation have been heard

FirstEnergy is paying $230 million to avoid prosecution for their crimes, but the deferred prosecution agreement does not require them to disclose who funneled money to elected officials to buy HB6 votes.

The Department of Justice limited disclosures to 2021 and beyond, maintaining the veil over the utility's activities in 2019 and 2020. The utility still faces multiple regulatory investigations and audits into the HB6 corruption scandal.

Questions about the role of former PUCO chairman Sam Randazzo, Governor DeWine and his staff in the scandal continue making headlines: 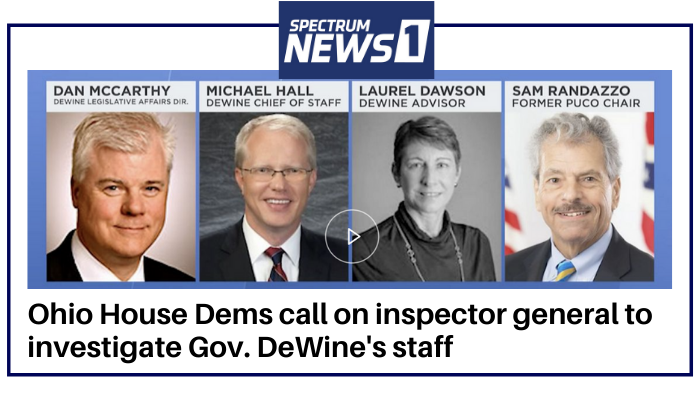 Rep. Casey Weinstein and Rep Jeff Crossman have called for the firings of Governor Mike DeWine staffers Laurel Dawson and Dan McCarthy and the duo is calling on Ohio Inspector General Randall Meyer to investigate the governor's staff.

FirstEnergy CEO and President Steven Strah admitted Randazzo helped the company fix its “Ohio hole” after his appointment as PUCO chair. A judge in Columbus has frozen $8 million of Sam Randazzo's assets to preserve them for future collection.

The true cost of HB6

How did your legislator vote on HB6?

This corruption at the statehouse invalidates the legislature’s vote on the bailout.

Government accountability is a big part of our mission at Ohio Citizen Action. We always put legislation through the "smell test" and HB6 stank all the way through:

If you want to get into the nitty gritty on exactly where Householder and FirstEnergy spent all that money, please check out this amazing interactive map that breaks it down by PAC and voting district. It was created by the Akron Beacon Journal and The Ohio Center for Investigative Journalism:

Tracking all of FirstEnergy’s political contributions is difficult, but if you want to delve even deeper, journalist Emily Atkin has done an amazing amount of work to reveal how extensive their donations are to both parties across many states.

The "Company A" piggy bank

A Talking Points Memo article explains how "Over and over, bank records show Company A allegedly wiring hundreds of thousands of dollars into Generation Now, as well as pass-through companies, at crucial moments — such as days before the November 2018 elections."

It looks like our campaign prop that we hauled across Ohio last year was more spot on than we could ever have imagined:

Also the news broke that "Company B" referenced in the FBI investigation is the now-bankrupt Ohio coal giant Murray Energy.

If you have any information regarding the Householder/FirstEnergy case, please call the FBI Public Corruption Tip Line (614) 849-1777.