Protecting public health and the environment

1982-86: Ohio Citizen Action leads the campaigns to pass the landmark toxic chemical right to know laws in Cincinnati, Akron, and Cleveland, and then plays a key role in shaping the federal Right to Know law enacted by Congress. 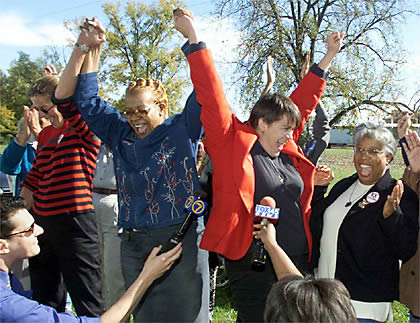 2012: A coalition including Ohio Citizen Action reveals serious environmental and financial flaws in a proposal to build a garbage incinerator on the west side of Cleveland, resulting in the project’s cancellation.

2017: Ohio Citizen Action and other groups win a lawsuit against U.S. EPA over delay in updating federal air toxics rules for 20 different categories of polluter. 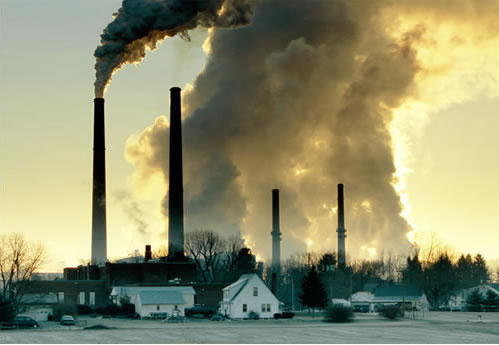 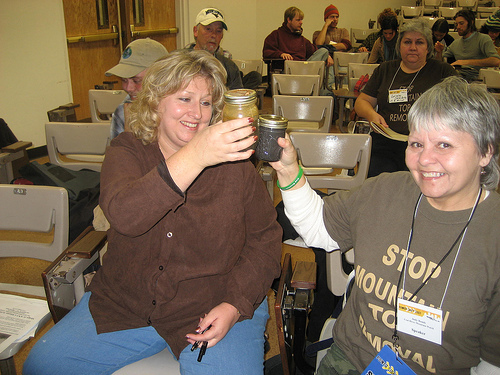 Elisa Young of Meigs CAN in Ohio and Judy Bonds of Coal River Mountain Watch cheers with sludge and sludge contaminated with water from West Virginia. photo: Liz Veazy

2010: Ohio Citizen Action works with allies in Appalachia on a successful campaign to persuade the Obama administration to crack down on mountaintop removal coal mining.

2012: Ohio Citizen Action campaigns for the City of Cincinnati to aggregate residents into a single, large buying group and then to contract for 100% renewable energy. At the time, Cincinnati is the largest city in the nation to do so.

2012: After decades of citizens’ complaints to enforce the Clean Air Act, FirstEnergy announces closure of all four of their outdated, polluting coal plants on Lake Erie and GenOn announces coal plant closures in Avon Lake and Niles.

2013: After testifying at the State Emergency Response Commission and petitioning U.S. EPA for for review of hazardous chemical reporting by oil and gas drillers, Ohio Citizen Action got drillers to resume reporting to state regulators after a twelve- year lapse.

2015: Consumer bailouts for outdated, polluting coal plants proposed by Duke Energy and American Electric Power are denied by the Public Utilities Commission of Ohio. Ohio Citizen Action gathers and submits thousands of comments from consumers into the official docket.

2015: Ohio Citizen Action defeats an 11th-hour amendment to the 2015 state budget that would have transferred a $72 million tax burden from utility companies to customers. In just five days, more than 500 people called on the governor to veto the amendment on the grounds that the large price tag merited further study. The governor’s veto cited our reasoning exactly.

2016: Ohio Citizen Action members rally at the Statehouse against a further 2-year freeze on renewable energy and efficiency standards in November and present the governor’s office with 25,000 petition signatures from pro-clean energy Ohioans. In late December, after repeatedly insisting that renewable energy should be part of Ohio’s portfolio, the governor vetoes the freeze extension bill.

2017-18: Ohio Citizen Action and allies successfully block 'fixed rate' increases on AEP and Duke Energy customers' electric bills that would have charged $120 and $192 more respectively regardless of usage.

Getting pesticides and chemicals out of the food and drinking water

1995-6: After three years of pressure by Citizen Action and others, Congress passes the Food Quality Protection Act to shield children from harmful pesticides in their diets, and thousands of letters from Citizen Action members persuades Ohio grocery chains, including Heinen’s, Kroger, Finast, Rini-Rego, Big Bear and Acme, to offer organic food grown without pesticides.

1996: a grassroots campaign led by Citizen Action persuades the cities of Columbus and Bowling Green to take steps to keep the weedkiller atrazine out of drinking water. 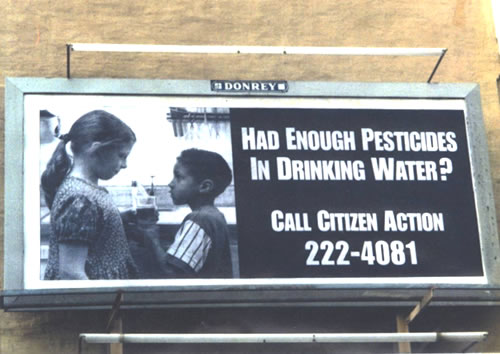 This billboard outside Columbus City Hall and more than 500 letters from Ohio Citizen Action members pressured the city to begin treating its water with granular activated carbon to reduce levels of atrazine - an herbicide that causes cancer and disrupts the hormone system.

2006: Ohio Citizen Action, working with Environmental Working Group, wins federal action to take Teflon products out of consumer products, and convinces WalMart and ConAgra to phase out the use of Teflon products in food packaging.

Following the money in Ohio politics

1983 – 2004 : Ohio Citizen Action helps win campaigns to stop two nuclear power plants in Ohio (Zimmer and Perry II) due to safety and financial issues, and from 2002-2004, when FirstEnergy’s Davis-Besse nuclear power plant on Lake Erie comes within an eighth of an inch of a nuclear meltdown, leads the campaign to force the Nuclear Regulatory Commission and FirstEnergy to confront safety violations.

1987: After a two year legislative brawl, Citizen Action and others win victims-rights protections in an insurance industry “tort reform” bill.

Ohio Citizen Action “alumni” go on to do great things, including running non-profit organizations, becoming doctors, lawyers, and teachers, getting elected to public office and taking leadership in their communities.

1995: To celebrate its 20th anniversary, Ohio Citizen Action establishes the Howard M. Metzenbaum Award, which has been awarded ever since to Ohioans who exemplify Senator Metzenbaum’s spirit of “principled tenacity.”