Energy markets have been moving toward renewable energy for over a decade. As maintenance, compliance, and fuel costs rise for aging coal and nuclear plants, costs are falling for solar and wind. Ohio’s growing clean energy sector is in a prime position to capitalize on this trend.

Ohio wind power can play a huge role in revitalizing our economy, especially in rural farming communities. Ohio boasts the most wind-related manufacturing centers in the country and last year, the clean energy sector grew to an all-time high of 112,000 jobs, even as Ohio employment dropped overall. That could be just the beginning, as Ohio’s potential for wind power generation- approximately 119,000 megawatts- dwarfs that of neighboring states.

Despite this strong foundation for a potentially booming wind energy industry, Ohio’s installed wind capacity is only 729 MW. That’s less than most of the neighboring states with whom we compete. In fact, many states are leaving us behind. 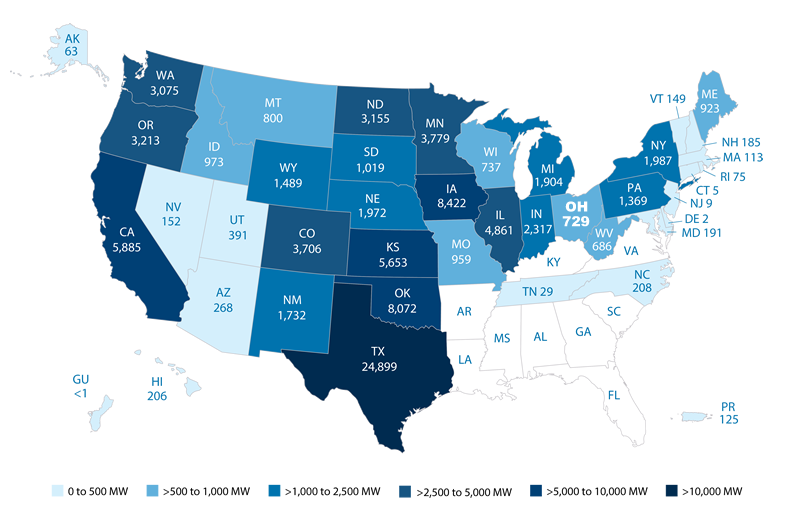 With only 3% of the state’s energy generated from renewable resources in 2018, it’s time our lawmakers unleash the power of renewable energy and reestablish Ohio as an innovator and leader. That starts with fixing Ohio’s restrictive wind setback law.

Since the wind setback law was revised in 2014, wind development nearly halted. The new law requires that wind turbines be nearly triple the previous distance of the original setbacks. The law was adopted as part of the 2014 budget bill with no public input, expert testimony, or debate. According to a report from the American Wind Energy Association, “In practice, this requires setbacks of about 1,300 feet from each turbine’s base to the edge of neighboring property, even if the presence of farmland means that the distance to an actual home is much, much greater.” Our law restricts wind development through unreasonable setbacks, placing it among among the most strict setback laws in the country and discouraging investment in our state.

Even planned wind projects have been put on hold. As of March 2017, more than 3,000 megawatts of wind power projects were either awaiting approval or awaiting construction. Combined, these projects could provide enough power for 900,000 Ohio homes and unleash $4.2 billion into local economies. That includes millions of dollars in land-lease payments to farmers, as well as millions of dollars in payments in lieu of taxes to the local counties and school districts. In addition, these wind projects would create 13,000 jobs.

Wind turbine prices have fallen by around 50% in 2010-2017, depending on the market, leading to cheaper wind power globally. Onshore wind electricity costs have dropped by almost a quarter since 2010, with average costs of $0.06 per kilowatt-hour in 2017 – a price that is competitive with any of Ohio’s utilities’ prices.

Wind is good for farmers, good for Ohio

Paulding County in Northwest Ohio is one example of wind working for the community. The county’s Timber Road II Wind Farm checks all the boxes for a utility-scale wind project: strong wind resources, excellent access to a transmission line, and proximity to power markets. The wind farm complements agricultural land use in the area (primarily corn, soy beans, and wheat), allowing Ohio farmers the option to supplement farming with revenue from wind. With farming profits so dependent upon unpredictable weather and price volatility, the reliability of wind farm revenue provides farmers security.

How does Ohio measure up to our neighbors?

Right now, Ohio’s 617 MW (megawatts) of wind generation capacity pales to that of our closest neighbors. Even West Virginia -the capital of Coal Country- has installed 686 MW. Our potential to generate wind power dwarfs neighboring Indiana, Pennsylvania and Michigan, so we have room to catch up. And that potential means potential dollars too, as Ohio ranks #1 in the U.S. for wind-related manufacturing.