Ohio Citizen Action extends condolences to Alice Lynd upon the death of her husband Staughton at the age of 92. Both Staughton and Alice are great examples of "principled tenacity", a characteristic among many that won them our highest recognition, the Howard M. Metzenbaum Award in 2012. 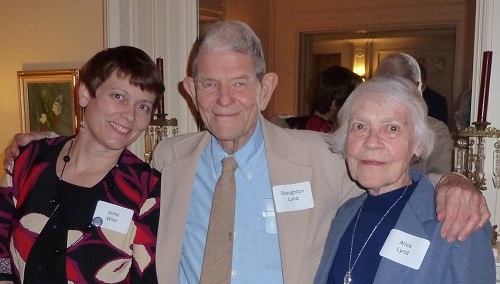 YOUNGSTOWN -- "Originally from Philadelphia, Lynd practiced law in Youngstown, including for several years with Northeast Ohio Legal Services, during the turbulent years of the local steel industry’s demise in the late 1970s and early 1980s. He worked closely with a variety of forces that tried to keep the steel mills open and operating....

In 1964, Lynd oversaw setting up Freedom Schools throughout Mississippi, which were the backbone of Freedom Summer, led by the Student Nonviolent Coordinating Committee and the Congress of Racial Equality, two major civil rights organizations that recruited hundreds of mostly white and young Northerners to come to the state to help blacks register to vote and receive a better education. He also worked with the late Bob Moses, an educator and activist who was the Freedom Summer’s main organizer...

Lynd was well known and revered in the Valley for his activism on behalf of workers and others."