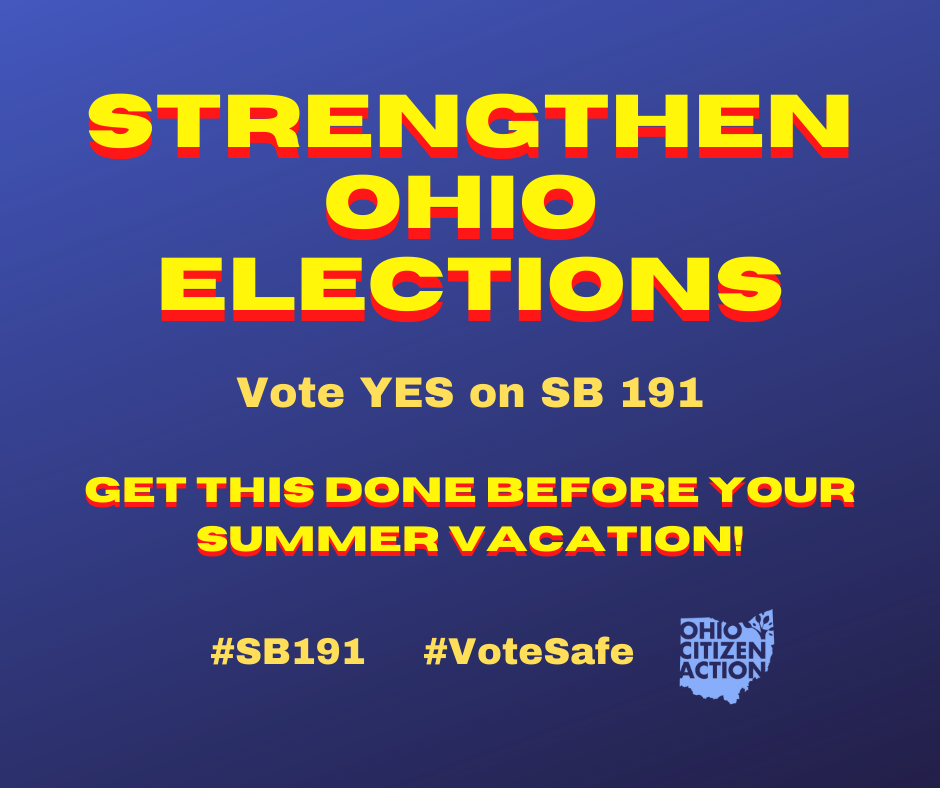 Senate Bill 191 is common sense legislation to make our voting process more efficient for voters and election officials, by allowing voters to request an absentee ballot online. As public health concerns persist, Ohio must make improvements to absentee and early voting; no Ohioan should be forced to choose between protecting their health and casting their ballot. The bill has had three hearings but is currently stalled in the Senate.

Strengthening Ohio's vote-by-mail system is critical as we head into the fall election. Maximizing the number of Ohioans who vote-by-mail will go a long way to minimizing long-lines at the polls in November. Both the Secretary of State and the Ohio Association of Election Officials strongly support SB191. Secretary LaRose says an online application system can be up and running in three months. We need to push the Senate to act now so this bill is passed before summer recess.

As we saw in the Primary, Ohio's vote by mail system is inefficient, confusing, and cumbersome for voters and election officials alike. Countless Ohioans were cut out of the process through no fault of their own. SB 191 would allow voters to securely request their ballot online -- but we also need other improvements to the bill: prepaid postage for ballots and applications, multiple drop boxes for ballots, and more Early Vote Centers per county, and more.

Contact your Ohio Senator today, and ask them to Support SB 191 and urge Senate leadership to bring the bill up for a vote before summer recess. Time is of the essence!

Step 1: Find your Ohio Senator at this link.

Step 2: Call and ask them to support Senate Bill 191, plus other election improvements such as prepaid postage for ballots and applications, and ensuring there are are multiple drop boxes and Early Vote Centers per county.

Here’s an idea of what to say: Hi, this is [NAME], a constituent, calling from [TOWN]. I urge my senator to take action to strengthen Ohio's absentee and early voting systems so we're ready for the November election -- even if there is another health crisis.

I also ask my senator to join me in urging the Senate Leadership to bring Senate Bill 191 up for a vote before the summer recess. Thank you!

Thank you for speaking out!