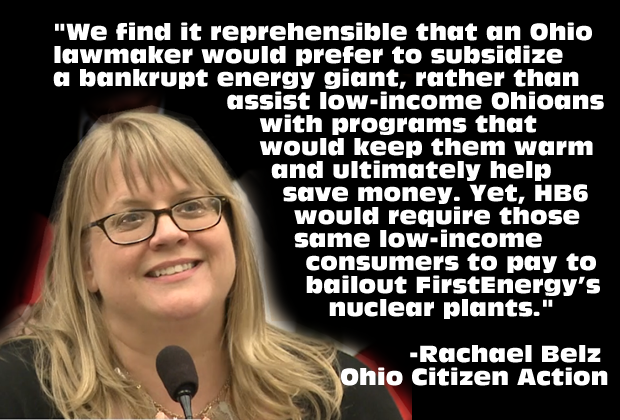 COLUMBUS — “On behalf of Ohio Citizen Action, I write to ask you to remove Representative Nino Vitale (R-Champaign, Logan and part of Shelby) as Chairman of the Ohio House Energy and Natural Resources Committee. You’ll recall that we recently sent a letter asking for Rep. Dick Stein’s resignation after he shared his biased anti-wind generation technology stance while representing himself as an all-the-above leader in making decisions related to Ohio’s energy future. Already, here we are again now that Vitale has made his bias against low-income Ohioans and the energy programs that benefit them known. Stein, co-chairman of the Ohio House Subcommittee on Energy Generation expressed his anti-renewable view and now Vitale is sharing his anti-energy efficiency opinion. It’s interesting that leadership among the House’s energy committees are against two fundamental aspects of our energy future – energy efficiency and renewable energy. Ironically, these are the areas excluded under House Bill 6.

As an organization with a strong commitment to helping all consumers see the benefits of clean, renewable and energy efficiency efforts and affordable utility bills, we find Vitale’s comments are imprudent, inappropriate, narrow-minded and discriminatory.

…We find it reprehensible that an Ohio lawmaker would prefer to subsidize a bankrupt energy giant, rather than assist low-income Ohioans with programs that would keep them warm and ultimately help save money. Yet, House Bill 6 would require those same low-income consumers to pay to bailout FirstEnergy’s nuclear plants. Vitale’s stance fails to put the needs of his constituents first. It fails to think of those in need. It fails to see the big picture or listen to logic. Ironically, 11.1 percent of residents in Champaign county live in poverty as do 13.7 percent of Logan residents and 8.9 percent of Shelby residents – all Vitale’s constituents.

Vitale is entitled to his own beliefs and bias towards poor Ohioans, but he has revealed his one-sided goal to benefit Wall Street investors – not hardworking Ohioans. Someone so blatantly opposed to helping low-income Ohioans is unfit to lead the Ohio House Energy and Natural Resources Committee.

Mr. Speaker, we hope you agree that by his actions, Rep. Vitale is unfit to lead as Chairman. ”