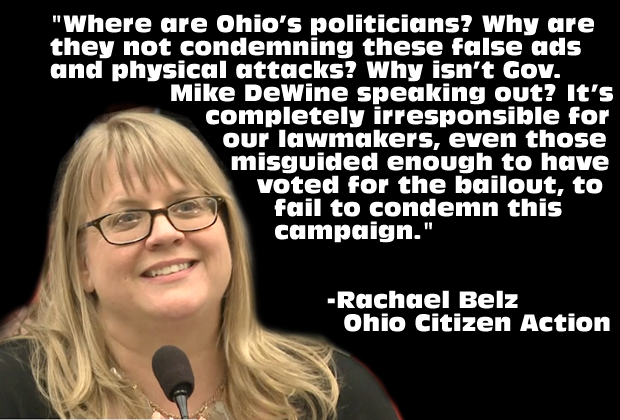 COLUMBUS -- "As executive director of Ohio Citizen Action, I feel compelled to express my disgust over the outright lies pro-bailout forces have employed to quash the ballot initiative to repeal House Bill 6, the coal and nuclear bailout bill. It’s bad enough to suggest that signing a petition gives personal information to the Chinese government, but Ohioans for Energy Security goes too far in encouraging Ohioans to report petitioners’ locations via a “hotline,” as if they were an invading menace to be feared.

Our staff members circulate support statements for our energy campaigns and my first thought when seeing the ads was concern for their safety and helping them to avoid harassment. On these grounds, our organization has issued a cease-and-desist letter calling for the ads to be pulled.

Where are Ohio’s politicians? Why are they not condemning these false ads and physical attacks? Why isn’t Gov. Mike DeWine speaking out? It’s completely irresponsible for our lawmakers, even those misguided enough to have voted for the bailout, to fail to condemn this campaign.