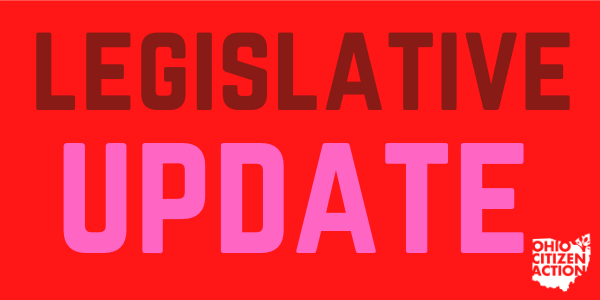 The Ohio General Assembly has left Columbus for the summer, quite literally leaving the good, the bad and the ugly in their wake. Here’s all the latest from Ohio Citizen Action’s legislative efforts thus far in 2021. Our work is clearly not done, and you have some calls to make! See ideas for action below. We need your voice!

Ohio Citizen Action worked with partners to put a statewide referendum overturning House Bill 6 put on the November 2019 ballot, an effort that failed after one of the nastiest campaigns we’ve ever seen. A pair of dark money groups, Ohioans for Energy Security and the now-admitted guilty Generation Now, spent at least $25 million on TV ads and mailers attacking the referendum effort.

Then in July 2020, Rep. Larry Householder (R- 72) and others were arrested by the FBI in connection with the $60 million bribery scheme surrounding HB 6. Ohio Citizen Action called for the full and immediate repeal of HB6 and the removal of Larry Householder from the legislature. By late March 2021, the pressure from OCA members and coalition partners led to Ohio lawmakers repealing the rate-payer funded nuclear bailout portion of the law, via HB 128.

Consumers can look forward to the $27.5 million decoupling refund provided by HB 128 in August 2021. Householder was finally expelled from the House in June 2021, which will be filled by Ohio State Highway Patrol former commander, Kevin D. Miller.

Ohio Citizen Action celebrates all of these victories, but more work needs to be done. As you read this, $233,000 taxpayer dollars a day flow to subsidize two dirty, old coal plants on the Ohio River, and Ohio’s energy efficiency and renewable energy standards remain gutted. Ohio Citizen Action has continued the call for a FULL repeal of HB 6.

ACTION: Even if you’ve written before, please take the time to tell your legislators again to FINISH THE JOB and fully repeal House Bill 6 at repealhb6.com.

House Bill 109 was introduced in February 2021 by Reps. Cindy Abrams (R- 29) and Sara Carruthers (R- 51). HB 109 is an anti-protest bill which raises the stakes of being involved in a protest in order to intimidate activists and chill free speech. Not long after its introduction, the board at Ohio Citizen Action voted to  strongly oppose HB 109. The bill creates higher fines and prison time for individuals involved in and organizations supporting any protest where the activities are subjectively deemed a “riot.”

Opponent testimony on HB 109 was held Thursday, June 24, but it was added to the committee's agenda on a Tuesday evening, with a 9:00 am Wednesday deadline for all testimony. It's not surprising that the Ohio legislature scheduled an opponent hearing for an anti-protest bill with so little notice. As of now, it is unclear how or when HB 109 will move forward. Ohio Citizen Action remains strongly opposed to HB 109.

ACTION: Call or email your state representative and urge them to vote against HB 109. Find your rep here: Ohio House District Map.

Introduced in February 2021, Senate Bill 52 is sponsored by Sens. Bill Reineke (R- 26) and Rob McColley (R- 1). SB 52 subjects renewable energy projects to a new and additional layer of government regulation not applied to any other energy source, and blocks landowners from installing solar and wind projects on their own land.

Ohio Citizen Action took swift action to strongly oppose SB 52 and to organize members to urge state lawmakers to stop the bill. The controversial legislation faced roadblocks and many rewrites as a result, including united opposition from the business, farming, and environmental communities -- and did not get the easy victory proponents had expected.

The soon-to-be law is a de facto moratorium on wind and solar energy production in the state. SB 52 is currently sitting on Governor DeWine’s desk. It has become clear the policy is going to be a substantial deterrent to economic investment in Ohio, so while we expect the Governor to sign the bill into law, its detrimental impacts likely mean this conversation will continue.

Find out how your representatives and senators voted on SB 52 here. Ohio Citizen Action remains strongly opposed to SB 52.

After months of pressure from Ohioans to repeal HB6, Senate Bill 117 was introduced in March 2021 by Sens. Mark Romanchuck (R- 22) and Hearcel Craig (D- 15). SB 117 is a bipartisan repeal of the HB 6 rate-payer funded bailout for the Ohio Valley Electric Corporation (OVEC) coal plants: Kyger Creek in Ohio and Clifty Creek in Indiana.

As you may know, OVEC was initially developed in response to national security concerns during the 1950s, OVEC’s contract with the Department of Energy ended in 2003. The plants are currently owned by AEP, Duke, FirstEnergy, and AES Ohio (formerly Dayton Power and Light). These utility companies were committed to pay any OVEC costs through 2040, which ended up being a bad business decision on their part, which led to the rate-payer funded OVEC bailout included in HB 6.

The repeal of this coal bailout is a strong step in the right direction. Proponent testimony for SB 117 was held in May 2021, and came from a large and vocal group of stakeholders. Business owners, environmental advocates, and members of the public all voiced their support for SB 117. Opponent testimony for SB 117 was held June 15, 2021. It starkly contrasted the proponent hearing in that the only opposition came from representatives of the utility companies. While the legislature is on recess,

SB 117 sits in the Senate Energy and Public Utilities committee. A full repeal of HB 6 is incomplete without a repeal of the OVEC bailout, and we need Ohio lawmakers to pass SB 117 to make this possible. Ohio Citizen Action is strongly in favor of SB 117.

You make this advocacy possible. We couldn't do it without you!