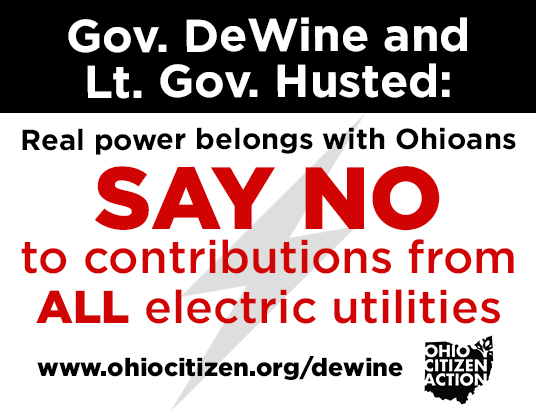 Governor Mike DeWine and his Administration may hope that Ohioans did not notice he chose to sweep the House Bill 6 scandal and Public Utilities Commission corruption under the proverbial rug during this year’s State of the State address, but that is not the case. In his first State of the State address since news of the House Bill 6 bribery and racketeering scandal broke, Governor DeWine irresponsibly omitted any discussion of the need for real utility reform and government transparency in his remarks.

Governor DeWine and Lt. Gov. Husted created a culture in Ohio where utilities are in control of politics and policies and cleaning up that mess does not appear to be a priority for them even today. His refusal to acknowledge that his Administration had been touched by the allegations and his refusal to support real reforms around regulated utilities has driven Ohio Citizen Action to launch the “Crime with DeWine” campaign, asking the Governor to put an end to the free reign enjoyed by Ohio’s top utilities for far too long.

Why is Governor DeWine hiding from the opportunity to be a real leader for Ohio? There are clear actions that can be taken to restore faith and confidence in our state government. Our campaign has asked Governor DeWine and Lt. Governor Husted to do their jobs for all of us by:

We all agree that real power should lie with Ohioans, not with Ohio utility companies. No more empty promises, Governor. Stop the culture of corruption in Ohio.