After over two years, the DeWine/Husted Administration has failed to take decisive action in the wake of the $61 million scandal surrounding House Bill 6.

Here’s how you can help us hold Governor DeWine and Lt. Governor Husted accountable:

“Governor DeWine and Lt. Gov. Husted created a culture in Ohio where utilities are in control of politics,” said Rachael Belz, CEO of Ohio Citizen Action. “They defend their staff and even former PUCO Chair Sam Randazzo in the face of clear and mounting evidence linking them to corruption. Why is Mike DeWine choosing to defend those at the heart of the scandal rather than standing up for Ohioans?”

Ohio ratepayers have been subjected to paying for the bad business decisions and corrupt actions of regulated utilities for decades, with increased charges being levied on every Ohio utility bill today to subsidize coal plants included in House Bill 6. According to documentation from FirstEnergy, former PUCO Chair Sam Randazzo received $4.3 million from FirstEnergy weeks before becoming its top regulator. In addition, recent audit reports have also uncovered that ratepayer dollars were improperly used to fund House Bill 6 dark money lobbying efforts.

Our Crime with DeWine campaign has outlined three very specific asks for the DeWine/Husted Administration:

Check out our Bribery Bunch video:

Here's our digital billboard that was on display at the corner of State and High by the Riffe Center in downtown Columbus: 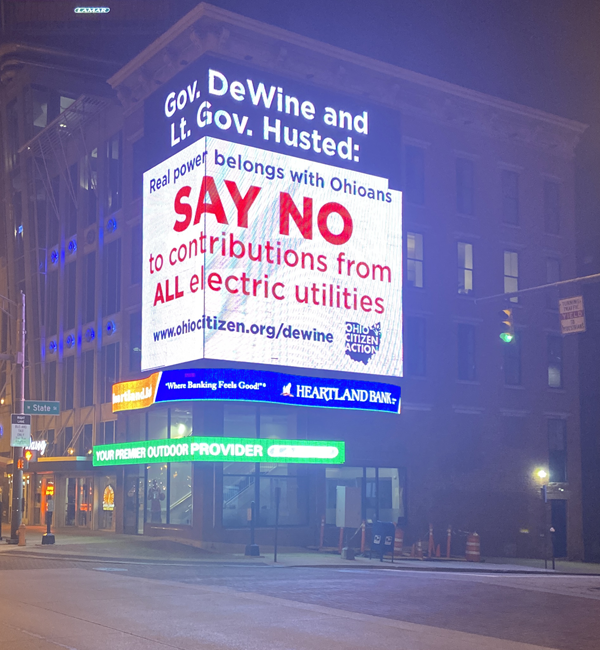 A message from CEO Rachael Belz in response to the launch of Crime with DeWine:

"This is a Huge Concern"